Every year at the kids school back home, World Book Day is celebrated by all the children in the school dressing up in a book character of their choice. This is also known as “Oh god! What the heck are they going to wear and what do I have to make?” Day. There are some parents out there who are resourceful. There are some that will just buy a fancy dress outfit. And there are parents like us, that suggest characters the kids could be; based on their current wardrobe and things we have lying around the house. Things like, “Harry Potter on half term” (normal clothes and a chopstick in their pocket). None of this “I have to be a Dickens character or an animal of some sort”. Err no. Ask any parent about the stress caused in making sure you send your child to school in an outfit that can match one of their peers.

Thankfully, for me, we didn’t need to partake in the dressing up this year. However, we didn’t want miss out on the day and so decided to try and get a picture of the kids reading in an unusual place. Luckily we had a day trip planned so the kids grabbed their books and brought them along for the ride.

Our day took us through some of Bali’s beautiful towns and villages that lead up into the hills in the north of the island. The rice paddy fields and terraces are spectacular in their simplicity. From afar they are like green patchwork quilts. Close up, the rice shoots are planted in perfect symmetry and impeccably maintained. As the hills got steeper, the rice terraces made way for fruit and vegetables like sweetcorn and strawberries.

As the twisty road broke through the mist at the summit, we were greeted on the roadside by a monkey. This was a highlight for the kids, as to see a Bali monkey in the wild is pretty cool. The cool factor soon disappeared as, around the next corner, we encountered about 100 more. Oh. Not so special. Or course, the kids were straight in there and kept asking if we could stop and go up to them, possibly even hold one. I promptly reminded them about our time in the Thai Travel Clinic and how we opted not to have the rabies injections. “Drive on!”.

As we began to descend down the north side of the hills, the rice fields were noticeably missing and instead, it was just jungle. The road twisted down the steep hillside and we soon arrived at our destination. We pulled into a carpark, which was only big enough for 3 cars. The waterfall we were heading for wasn’t really a major tourist attraction. Our driver knew this place would be better as we explained we don’t like turning up at places with tour

busses everywhere. To get to the waterfall we had to walk about 1km down a muddy path through the jungle. On our way down the path, we picked coffee beans off the trees and even spotted some pineapples growing. Its easy to forget these things grow around here. A little further on we all made room for some women carrying huge bamboo logs on their shoulders. Huge respect to them!

One thing with South East Asia, is that no matter how far you go to see something like we were, there is usually a chap sat down next to a hand painted sign with a price to pay in order enter. Sure enough, and almost comically, there was a young kid wanting to be paid so we could walk on further down the path. There is no problem paying to cross the land and its good to see them capturing some of the income from tourism. Its just funny to now almost expect to see somebody waiting, miles down a path, literally just sat in the middle of the jungle.

Anyway, back to the waterfall. Prior to our arriving at the falls, you feel and hear them. The sound of the falls can be heard from far away up the track and as you approach the foot of the falls, through the trees, the cold mist blows in your face. Its pretty welcome after the walk and the heat. On this trip we’ve seen a few waterfalls. Usually for ‘health and safety reasons’ there is railing or guard or sign to stop you falling in. Not here. We were free to explore and could even stand under the water if we wanted. The wind generated from the falls was pretty strong and would have left us soaked if we’d stayed there for too long.

We had to get the picture taken for World Book Day which wasn’t really hard- the location was pretty spectacular. The kids just sat on a fallen tree and read their books. Easy really. The look on our guides face was a picture too, as he couldn’t really understand why I was taking a picture of the kids reading a book. Next to a waterfall. But he had a good sense of humour and joined in the fun, even taking a picture of us all.

By this time, we were thinking of heading back for some lunch. On the way back over the hills we stopped off at Ulundanu Temple. Its also known as the Floating Template. This is due to the lake water flooding around the small island foundations that the temples sit on. The whole site is impressive, but a bit of a tour hot spot. It costs about £5 for a family entry. The gardens are beautifully kept and everything is clean and tidy. Unlike Thai temples, there doesn’t seem to be any worry about what clothes you are wearing. In fact there was one woman walking around dressed as if she was on a photoshoot for a Denim shorts and bikini brand. The Chinese tourists were taking more pictures of her than the temples themselves. Crazy! Our guide Putu rolled his eyes and laughed, saying she’s probably from Java.

The kids are getting better with walking around historical sites. I know its not the most interesting of places for a kid. For them, its an old building that they’re not allowed to make a noise in, or mess about. Once they’d gone around the gardens and temple grounds they disappeared into the kids play area. I just pray they don’t say it was the best thing there if anyone ever asked about the Floating Temple. 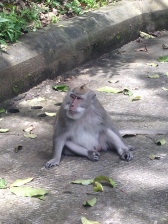 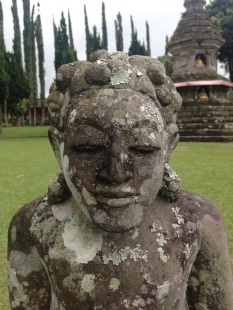 One thought on “Temples and waterfalls…..and World Book Day”