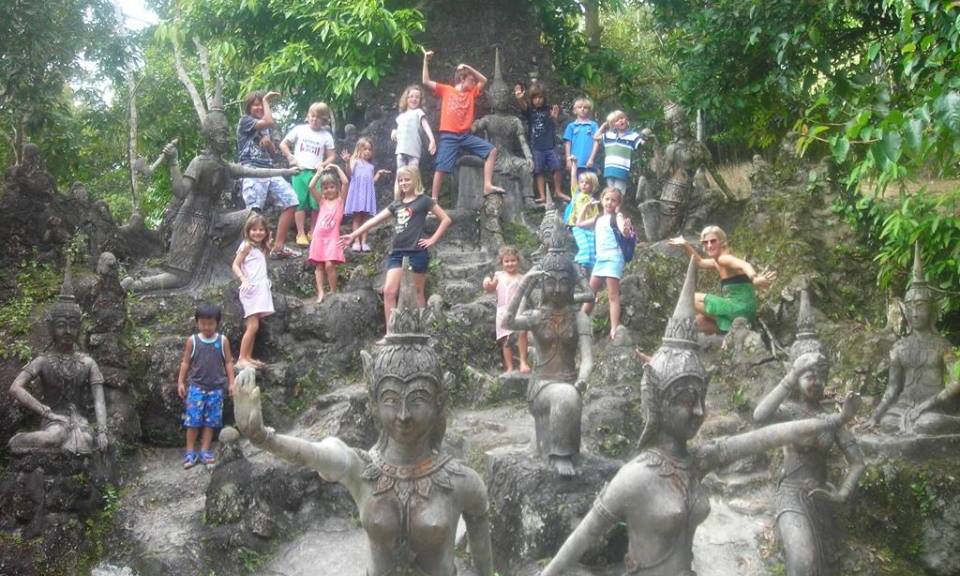 I had to wake up at 7:00, but that was going to be really difficult, as we hadn’t got up early since we’ve been in Thailand as we’ve been so tired after busy days and late nights! In the end, I woke up at 6:50 to a very sick family. Mum was the worst- with food poisoning. She couldn’t get out of bed! Dad had food poisoning too, but not as bad as mum. They both reckoned that it was the Calamari squid from the night before. Rosie was really sick as well, but she didn’t have food poisoning – she had a very high temperature! Optimistically, I got dressed anyway, made my packed lunch and I then sat down on the floor feeling sad, as I had been looking forward to going to ‘school’, ever since mum had told us about it.

At that point, dad got up really quickly and ran to the toilet and we could hear him being sick. I then knew for sure that I wasn’t going! But then he came out of the bathroom smiling and said, “Are you ready to go?” and I was really surprised, as he had just been sick and the school was on the other side of the island. I knew it would be a half an hour motor bike trip, over bumpy roads that are full of pot holes. Despite all this, he still got dressed and ready to take me. Just as we were leaving, Rosie woke up and when she found out that she wasn’t well enough to go, she really, really cried because had been wanting to go to school more than me!

half an hour to get there. We were also going to have to motorbike through the morning island rush hour traffic, which was horrendous; the road was extremely bumpy, which really hurt your bottom when you drove over the bumps!

When we eventually arrived there, lots of little girls looked over the balcony at dad and me. I whispered to him, “I really don’t think this is a good idea!” Totally ignoring my statement, he pressed on up the brick stairs and, of course, I followed. The garden was full of huge palm leaves, and small trees that were only just bigger than dad. We took our shoes off outside the front door, like we do at all places in Thailand, and gave the door a knock. Almost instantly, the door flung open and really nice lady called Sarah, let us in. She introduced herself and told me that I could put my lunch and drink in the fridge behind us. Not that much later, a boy just older than me arrived with his dad, and his name was Josh. Dad left after a couple of minutes and a young boy called Lucas, who was Sarah’s son, showed me what they had made. It was a barometer, and if you don’t know what that is, it is a tool that people use to measure the atmospheric air pressure, and will tell you whether it is going to be low-pressure, cloudy, or high-pressure, sunny.

To make one you will need: an old can or jam jar, a pair of scissors, an elastic band, a balloon, a straw and some sticky tape.

First you get your balloon and cut off the part where you blow into it to blow it up, second, you grab you tin can or jar and you put the balloon over the top, but the can must be empty and the top must be off. This is the hard part, as you need to have all the creases off the top of the balloon and the elastic band must be around the side too hold the balloon in place- this part is best with two people. Finally, cut the bendy bit of the straw off and stick it to the balloon surface close to one edge, using sticky tape. Once you’ve done that, you will have made your very own barometer!

As lots of the children hadn’t finished, we all set to work building, fixing and helping, until we had all finished making the barometers.

Sarah then called us all over to the living room as we were going to play some circle games, but before that, she introduced me properly to every one. Most of the other kids had ‘exciting’ news to share with every one else, and I said that it was dad’s birthday tomorrow as today was the 30th and his birthday is the 31st. Dad then called Sarah from back home in the hotel where we staying, to say that Rosie would be able to come in afternoon as she was feeling better.

In the afternoon, we were going to a place called ‘The Magic Garden’ and this place was a waterfall joined to a tiny river that ran down to a small valley. The river was full of rocks that Sarah said we were allowed to jump on. The journey was about half an hour long over bumpy roads, again, full of potholes, but unlike going over them on a motor bike (where you think your going to fall off every time), it was really, really fun! 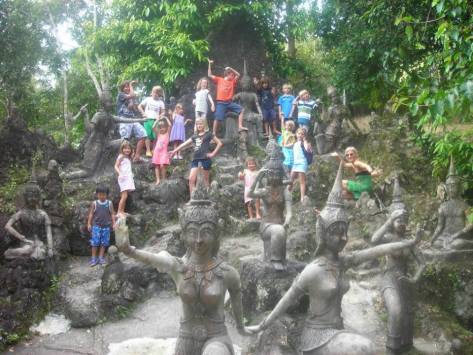 When we got there Sarah found a nice spot for us to eat our lunch; I had a ham sandwich, a packet of mini Oreos, a banana, a yogurt and a bottle of water. Some of the kids there hadn’t brought their own packed lunch, so Sarah took them down to the shop so they could buy their own. One of them came back and all he had was a big bag of crisps and a lemonade! Me, Josh and a bunch of little kids were all playing on the rocks, but when I explored a new part I saw a long, heavy brown stick and it gave me an awesome idea! I saw that about 100 meters down the rocky river, it stopped being rocky and became a proper river! I asked Josh if he would help me take it down there, and I could tell that as soon as I asked him that question, he was going to say yes!

After walking for a while to the end of the rocks, we decided to throw the log because the rocks ahead were under the water and the branch would of got stuck on them. The most frustrating thing was that when we chucked it got stuck on some vines and  then it was out of reach! On the way back, I organized a race across the rocks and back onto hard ground. I got off to a bad start when my flip flop fell off, but I caught up with all the kids and beat them by about 5 seconds! I’m not even lying!

I really liked the school as it was in a quiet place up in the mountains and all the kids were really nice and well behaved. Our teacher, Sarah, was also really nice and as well as being a mum in her spare time she was a really good teacher, as was her husband, Dave.