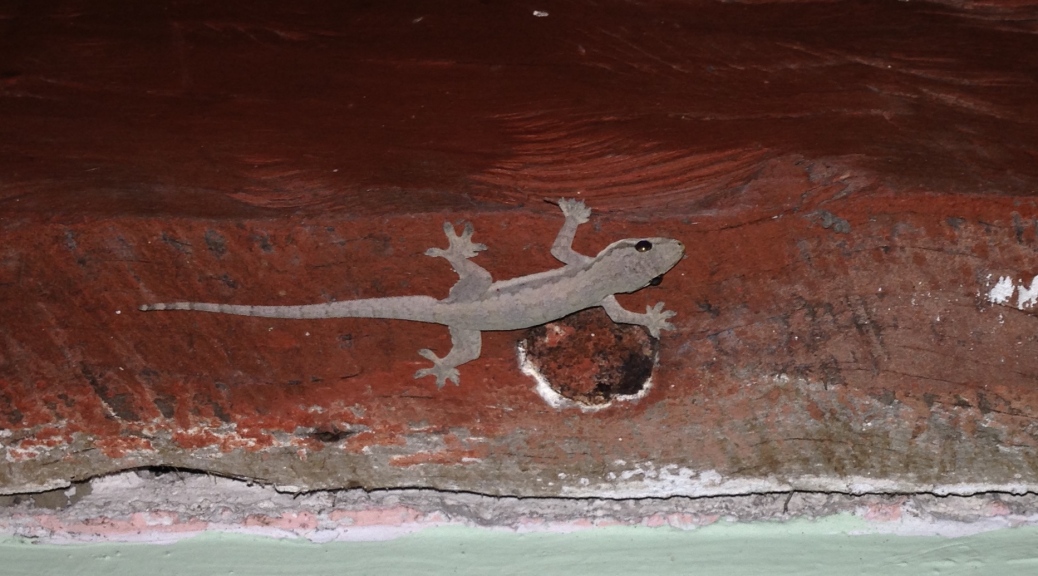 Having previously been someone who was quite nervous about critters and bugs, I’m getting pretty used to sharing my living quarters with other creatures. Here in Bali, its common to find much of the living space within a home is actually outside. Our open-plan lounge, kitchen and dining area doesn’t have walls – so we are kind of living in the garden. This is wonderful when the weather is extreme- we get to witness the monsoon rains from just a few steps away. So far, apart from a few drips from the kitchen roof, we haven’t had any floods indoors, which seems like a bit of a miracle.

The other thing about this though, is that we live amongst the local wildlife. I’d say that the wildlife lives amongst us, but actually its more of a shared environment. I thought I’d find this difficult. But actually, the reason why spiders, bugs and small mammals (mice etc) are freaky in your house back home, is because you immediately think, “Where did you come from and where are you going to hide?”, and “How am I going to get you out of my house without making contact?”. Whereas here, the creatures are merely passing through. They’re not interested in coming to sit on your lap, they don’t want to hide under your duvet and nothing hangs around in the bath. They are merely passing through the kitchen on their way to the big wall on the other side of the house, which of course, leads to bins outside; or perhaps via bathroom shortcut, which is the fast-track route to the ledge, onto which you get onto the roof. Because of this mutual lack of threat, we are happily co-existing.

So who are our neighbours?

Lionel #1 lives in the eaves of the lounge. I think there is also Lionel #2 also on the roof above our bedroom. There are definitely a few other ‘Lionels’ in the neighbourhood. How do we know they are there? Well, about 9.30pm, once the kids are in bed, Aaron and I like to enjoy one of the DVDs we have bought for 50p from the local movie shop. We settle down, enjoying the peace and quiet of an evening. You know the bit in a film, just when the loud, opening movie music has stopped playing and there is some vital-to-the-plot dialogue being spoken, usually in hushed tones? That’s the bit when Lionel #1 likes to announce he’s awake for the night, and that he’s helpfully positioned himself in his usual spot, just above the TV. Cue the his evening call, probably louder than a cockerell: It sounds a bit like, ‘Fok yoooou, fok yoooou, fok yooou’; and this continues, until he runs out of breath and just a final ‘yooous’ remain. He then goes quiet, waiting for the next tense, quiet bit in the movie, when he will do it all over again. We never see Lionel fully, but we know he’s pretty big, Sometimes he dangles his tail down from behind the wooden ceiling beam where he hides, just to show off his magnificence. Sometimes he scampers over the roof of the lounge and it literally sounds like a heard of elephants travelling overhead. We sit there, nervously, wondering at what point he might crash through the woven roof, onto our laps…. It hasn’t happened yet.

Betty bat crash landed onto the floor of our lounge one evening. After much writhing around, we waited for her to pick herself up, but it appeared that she had possibly hurt one of her wings. This was on our second night here in Bali, and 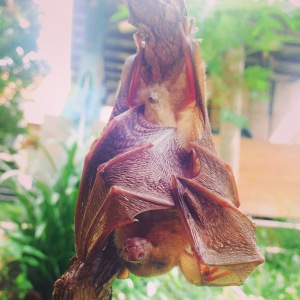 Ruben was finding the ‘being at one with nature’ a bit much. He hadn’t noticed the commotion caused by Betty; so when she didn’t get up and fly away, Aaron gently swept her onto the grass, by the edge of our kitchen, trying not to draw any attention to her presence.

The following morning, we checked on Betty and she had managed to climb a few feet up from the floor, onto a young tree stem. She was now hanging upside down, sleeping in the usual bat way, but  looking a bit breathless. We showed the kids what we had found and they were fascinated to have a close up look, although knowing not to touch her because of the risk of rabies, amongst other things!

Sadly, an hour or so later, we found Betty dead at the bottom of the tree, complete with tongue hanging out. Ruben scooped her up in the dustpan and gently added her to the garden compost heap, complete with a ‘Goodbye Betty Bat’ note, marking her short life. 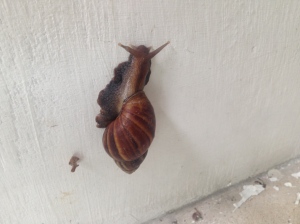 This morning, we noticed that a snail had started crawling up the wall beside the toilet. But this wasn’t any snail. This was Mr Giant. Perhaps he had mutated from his original ‘normal’ snail-size due to being over exposed to the drops of pee around the loo? We will never know. However, he is the biggest snail we have seen in a natural environment ever!

Occasionally we see rats and mice skirt around the edges of the room, as they are travelling from a to b. They don’t hang around. They don’t come anywhere near us and there is never the risk of one of them crawling up a trouser-leg (if we ever worse trousers!). Yok, our host, hates them and has left various traps around.

Unfortunately, when your kitchen is outside, there is going to be an abundance of food and food waste around the place, which they will generally thrive upon. Because of this, I think it would be difficult to eradicate them completely in this kind of environment. We make special efforts to ensure none of our food is kept outside (everything is stored either in the fridge or in a lockable cupboard), and so far, we have had no mousy-nibbles in any of our food; unlike when we stayed at the hostel in Penang, when we awoke to a big rat, munching through a pack of biscuits we’d left on the desk in our room! 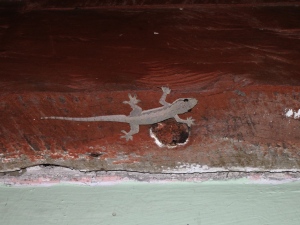 These are around 5cm long and we’ve seen them everywhere on our travels in Asia. They are most present at night, because they spend the evenings feasting on the very annoying mosquitoes and other little bugs which are around at this time. For this very reason, we consider them our friends and are very fond of them. They are seen  on ceilings, walls, doors and sometimes they pop up out of cupboards, etc. But they aren’t scary. They’re lightening quick and don’t hang around if they see / feel you approaching. A good thing to do whilst we are waiting for our food to be served in restaurants, is to play ‘spot the gecko’.

As we’re in Bali during rainy season, most days there is dramatic rainfall. We like this because a) it is a spectacle to watch (as long as you don’t actually need to get anywhere during the downfall!) and b) it clears the humidity.

However, we’re not the only ones who enjoy the rain. In the garden where we’re staying, there is a large family of frogs. You never see them and usually you’d never know they’re there. Until it rains. And then they start. I don’t know about Paul McCartney’s Frog Chorus, but this lot can keep going, at the top of their voices, all night long. If you’re watching a film, never mind about Lionel the Geckos timely interruptions; you may as well quit watching now, as with no walls between you and them, you can’t even hear yourself think, let alone watch an atmospheric film that may require quiet and concentration! Yok our host says they have kept him awake at night for years and sometimes he considers buying a gun to try and shut them up. Then the dry season arrives and you don’t hear from them for 6 months….

If I was a ‘Ms. World’ contestant, would I discuss World Peace during my pageant speech? No I wouldn’t. I would ask the citizens of the world to put their heads together to help me banish mosquitoes. Because they cause misery. Not even considering the havoc they cause with malaria and dengue fever across the world, they cause the most itchy bites the world has ever known. And there is something most appealing about little Rosie, for the mosquitoes love her the most. Regardless of the organic or chemical or nuclear anti-mosquito repellants we apply, and despite the anti-mosquito burning coils, electronic plug-in vaporisers and room sprays we use; we cannot stop the buggers biting us. We cover up during the risky times (sunrise and sunset), sleep under mosquito nets and follow all advice to avoid them, but nothing seems to work.

I guess this is just something we have to get used to, when travelling in this area of the world. And luckily, malaria is something we don’t have to worry about here. Dengue fever is common locally in Bali, although I wonder whether we may have had a mild version of this after our travels in Thailand? Unfortunately, our host Sarah from the plantation homestay in Chaiya, was hospitalised with dengue just after we left. Shortly after this, one by one, excluding Ruben, Aaron, Rosie and I all had several days with an extremely high fever, headache, dizziness and rash. Aaron even ended up collapsing at our hostel in Malaysia, which was a bit scary, once I realised it was a genuine faint and he wasn’t just fooling around… This unknown illness seemed to clear spontaneously in all of us and responded well, eventually, to paracetamol. If this is the case, we may now have some immunity to dengue in the future, although not completely, especially from the really dangerous kind- Dengue hemorrhagic fever. And even so, we don’t want to take any chances with the mosquitoes here, although so far, I think we’re losing the battle to avoid bites….