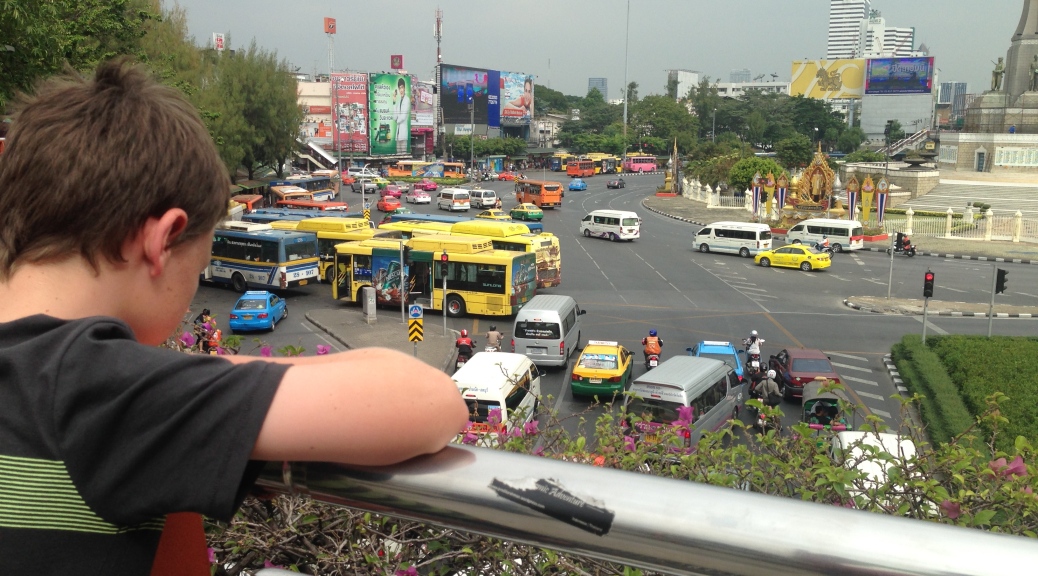 Wow! We have finally left the Western world and arrived in Asia. The next stage of our adventure! We disembarked the aeroplane at 1am and started walking the 1.5km through the enormous airport to find the exit. The first obstacle in our way was to find which section of immigration we needed to pass through. There were big crowds as immigration here in Thailand is a super-thorough process, involving having passports and tickets checked and double-checked and then photos taken for visas. The kids were very tired after the 9 hour flight and according to their body-clocks, it was 5 am Sydney time. We were stood in line behind the 2,000 others waiting (mainly Chinese), and we noticed that some people had started to turn around to take photos of Rosie. It was not really the time and place- luckily, the wonderful immigration officials obviously took pity on us, and they ushered us to pass through to the front! We were checked, stamped and out within half an hour! Brilliant!

The next challenge: getting to the hotel at 2am in a country where we don’t speak or read the language. The taxi rank though again, was well organised: you grab a ticket from a machine, having chosen the size of the vehicle needed for your party and luggage; and are then directed toward a specific driver, parked in a nearby bay. Our ticket had details of the driver’s name, car registration number and a phone number to call if there were problems with the taxi. Excellent. What could possibly go wrong with this efficient service?

The kids and I piled into the backseat of the taxi. Having previously heard about the ‘nightmare’ Thai traffic and risky driving styles in this country, I was happy to see there were seat-belts to keep us safe. That was, until we realised there were no anchor clips to secure the seat belts into. Hmmmm. Despite no working seatbelts, there were however, an awful lot of other things in the car, including lots of ornaments, 2-3 pairs of glasses (why would anyone need so many pairs of glasses, I wondered?!), various decorations hanging from the ceiling, Buddha statues and a packed lunch balanced on the dashboard. You could tell this chap was a professional driver who spent a lot of time in his car. It was very homely. Despite this, I gripped onto the kids hands tightly. I know that in the event of an accident this would provide very little safety, but it did make me feel slightly better.

Aaron was outside the car showing the driver our hotel address. He didn’t seem to know of the hotel, or the area where it was based, so to help, Aaron produced some maps he’d printed out earlier from google maps (just in case). Despite looking at these very close up for some time, even with a magnifying glass, the driver still didn’t appear to know where we needed to go. But after about 10 minutes deliberation, I guess he just thought we should crack on and he motioned to Aaron to get in the car. We left the airport behind us.

At first, I couldn’t quite figure out what was wrong with the driving. Or maybe it was the driver himself that set off alarm bells? He was holding steering wheel not at the usual ten-to-two position; more of a five-to-one, and was hunched forward, huddled so close to steering wheel. It was almost as if he couldn’t see. Surely not! But then we started veering across the three lanes of the highway. We were still only in second gear this whole time, so we weren’t going that fast and I’m unsure if this was reassuring or not at this stage. Other cars were beeping as they sped past. Aaron and I exchanged nervous glances. The driver was either partially sighted or didn’t have a driving licence. Or perhaps both. Bloody hell! I gripped our by now, sleeping kids hands tighter and tried to suppress a nervous giggle. We were stuck on the highway, travelling at exactly 38 miles per hour in second gear, with a driver that spoke no English and us no Thai. We couldn’t exactly tell him to pull over and stop.

Finally, thank goodness, we exited the highway and our driver then proceeded to drive blindly (!!) around the Sukhumvit Road area. For those of you who know Bangkok, Sukhumvit Road is a very long and busy road and I don’t think its the kind of place where you may just happen to come across an address you are looking for. The road number system appeared to be quite complex . After about half an hour, he stopped the car (almost in the middle of the road) to look on his phone. However he just couldn’t seem to get the map or navigation system to work . There appeared to be a problem typing in the address and despite Aaron trying patiently and kindly to help, he kept batting Aaron’s hand away. He didn’t want Aaron to touch the phone or point out landmarks on the map that may be useful. I know men are famously shy about asking for help with directions, but by now it was 3am. And with 2 very tired kids and us having no sleep for almost 24 hours, we were getting a little impatient!

To add to the excitement of this slightly stressful situation, the car was still in gear; so every now and again, our driver’s foot would slip off the clutch, revving the engine wildly. Unbelievably, he’d actually remembered to put the handbrake fully on, so this meant the car would only judder violently forward a few inches, lurching us out of our (unrestrained) seats by just a few feet. I’m glad to say this only happened about 6-8 times before it was finally decided that he’d just do another drive around of the area. He admitted he didn’t know Bangkok city that well.

Without indicating, he pulled straight into the passing traffic and without checking his mirrors, did a U-turn. It was at this point, just around the corner, that we were very relieved to see our hotel. Aaron excitedly pointed it out and our driver drove straight past. Realising his mistake, he then reversed at speed, the 10 metres he’d overshot it. As we unloaded our luggage onto the pavement and paid his fare, he laughed at the crazy journey we’d just had and apologised for his lack of knowledge of the city. He then crawled away into the night. At 4am, after checking into the hotel, we finally got into bed.

Thailand: The Brooks family has arrived!