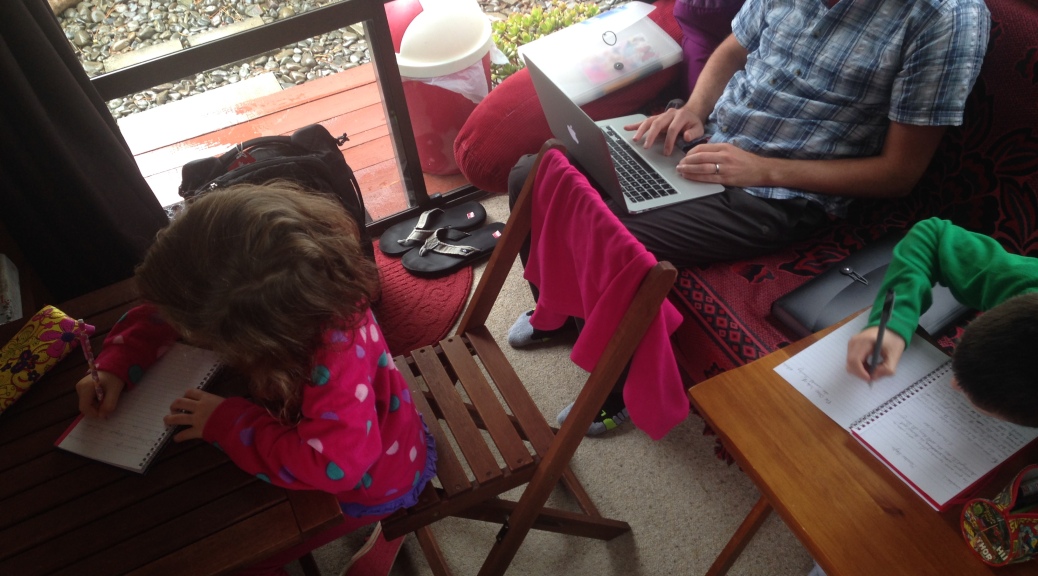 Educating Ruben and Rosie on this trip is all part of the adventure and learning experience. Although lots of the things we’ll see and do will be a rich cultural adventure, we feel it’s really important that they keep up with their academic studies and don’t fall behind the expected targets of a normal school kid of their age.

We’ve spent the first few days in New Zealand finding our feet and getting over the jet lag (a sudden tiredness that overtakes everything at random times of day…) but today was the first day to get down to some ‘school work’.  It’s at this point that ‘Mum’ and ‘Dad’ transform into “Mrs Brooks’ and ‘Mr Brooks’… I actually think this might be the scariest part of the trip, as much like dodging malaria, it’s not something we want to get wrong. Rosie has already helpfully told me this morning that Miss Rawlings (her teacher) is the best teacher she’s ever had and she misses her terribly.

Well. Our plan is to do a little bit of structured learning every day.  Spellings and sentences for Rosie every morning. Some maths in the afternoon- totting up the budget for Ruben; times tables for Rosie. The kids are going to be adding to the blog too, so will be spending some ICT time in editing their posts and adding their chosen photos. We’ll be listening to them read every night and also getting them to read street signs, restaurant menus, directions….

After sitting down for half an hour of solid concentration (about as much as they can do in one sitting, I’ve learned today…) it’s snack time. I’m informed that “At school we get fruit snack”, so Mrs Brooks turns dinner lady and knocks up a healthy fruit snack. Rosie hasn’t really tried kiwi fruit before and because they’re the cheapest thing in the supermarket, we’re going to getting lots of them over the next few weeks!

Aaron has put together a daily timetable so Ruben and Rosie know what’re going to be doing. Today has been good. It’s helped that we woke up to rain for the first time- a good excuse to stay inside and get some stuff done. Rosie has done two pages of work and Ruben has drafted his blog entry.  It’s stopped raining and they’re now enjoying some ‘outside play’- they’ve run down to the local play park. Maybe that can count as P.E.?!

This afternoon we’re going over to One-Tree Hill which is of one of the largest former Maori settlements in New Zealand. It’s thought to be one of the largest pre-historic earth forts in the world. It will be interesting to see what they make of this.

I have just realised we need to get some glue so they can cut and stick bits and pieces into their work-books. Next stop Whitcoulls (the NZ equivalent of WH Smiths)….